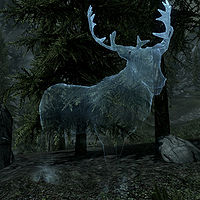 The Aspect of Hircine

The Aspect of Hircine is as the name suggests, an aspect of the Daedric Prince Hircine that appears in various forms. It plays an integral role throughout Ill Met by Moonlight, first appearing before the player as a spectral stag after killing the White Stag, and in that form again at the end of the quest if you side with Sinding. If you decide to slay Sinding, the Aspect of Hircine will instead appear using Sinding's form at the end of the quest.

When speaking to him for the first time, he will greet you. You can then reply, with several options to netting different responses.

"Well met, hunter."
Are you Hircine?

"I am the spirit of the hunt, just one glimpse of the glorious stalker that your kind calls Hircine."

Didn't I just kill you?

"And skillfully, too. I've been watching you for ages, it seems. You have the makings of a fine hunter. You may even be my champion. Perhaps."

You can then ask him one of two questions, both of which lead to the same conclusion.

Regardless of your earlier choices in the conversation, he will give you a task. No matter how you answer him, you'll learn that Sinding is in danger.

"The one who stole it has fled to what he thinks is his sanctuary. Just as a bear climbs a tree to escape the hunt, but only ends up trapping himself. Seek out this rogue shifter. Tear the skin from his body, and make it an offering to me."
It shall be done as you ask.

"Fly my hunter. There are others who vie for my favor. A bit of competition. Don't dally while my prey flees."

He's done me no wrong. I won't kill him.

"There is no retribution in the hunt. It is not vengeance I seek, but the blood course of a living hunt. There are others who would gladly accept my favor. They will hunt him while you delay. Your choice."

You'll encounter Hircine outside of Bloated Man's Grotto after saving Sinding from the hunters. He will greet you by saying:

After picking either option, Hircine will explain how your choice still honors him.

"By bringing down my other hunters, you turned the chase inside out. And they were no base prey. You continue to amuse and impress. Go forth, with my blessing."

If you sided with the hunters to kill Sinding during the Great Hunt, he will appear after you skin Sinding.

"You've done well, hunter."
I did as you asked.
"And found my favor. That skin will serve you well, child. Look more closely at it. My glories shall protect you from all this world's grievances."