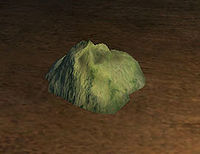 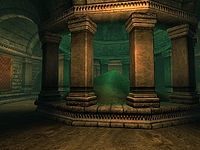 The Greenmote Pile is the only available source of the drug

Greenmote is a potent drug taken by Thadon. It only becomes available once you have started the quest Ritual of Mania, at which point you gain access to Greenmote Silo. The Greenmote Pile in the silo can be activated as many times as you want to obtain samples of Greenmote. Two samples are required to complete the quest; any additional samples can be kept for subsequent use.

Greenmote's only effect is Greenmote Rapture. Consuming one or two samples provides the player with the following effects for 60 seconds:

It also adds slight double vision, supposedly the Greenmote Rapture effect. However, eating three samples within a 60 second interval is very poisonous. If the player eats three samples at once, it leads to immediate death with the message "You have overdosed on Greenmote". During the related quest, Thadon is killed when he consumes three samples. However, no other NPCs in the game can be killed using Greenmote: the scripts will not have any effects on other characters in the game. Therefore, Greenmote cannot be used as a general purpose poison, unlike ingredients such as Poisoned Apple or Chokeberry.

Poisons with the Greenmote Rapture effect can be created (see Special Effect Potions), which have the same effect as plain Greenmote. In other words, the poison cannot be used on any NPCs.