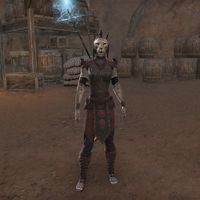 Zav'i is a Dagi Khajiit found inside the cavern of Red Hands Run along with her brother, Akumjhargo. Together, they lead the Red Hands bandit group.

During a battle, Zav'i will use frost magic while she orders brother around to do the physical work.

When she notices you, she will be annoyed with your interference:

Zav'i: "What's that? You fools wish to cut into our profits? No deal!"
Zav'i: "More delays? I hate delays! Kill them!"
Zav'i: "Nobody interferes with our business. Nobody!"

While fighting, she'll order Akumjhargo to do his spinning attack[verification needed — name needed] and her brother will comply:

If you kill Akumjhargo before her, she yells:

Zav'i: "Brother! Curse you, you meddling bastards. Curse you!"

When defeating her, she says:

There is one Achievement associated with this person:

This Online-related article is a stub. You can help by expanding it.
Retrieved from "https://en.uesp.net/w/index.php?title=Online:Zav%27i&oldid=2134399"
Categories:
Hidden categories: