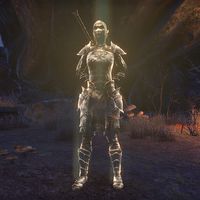 Orator Salothan is the leader of the ghostly Dunmer encountered at Salothan's Council, accompanied by Councilor Reynis, General Tanasa, and Regent Beleth. Her skeletal defenders, scouts, and loyalists also assist her in battle.

When you start attacking the group, she will cry out.

Orator Salothan: "We have been betrayed! They are upon us!"

As her councilors are struck down she may give impromptu eulogies.

Orator Salothan: "Tanasa, my strength. Never did you yield, and so never shall I"

Orator Salothan: "Loyal to the end, Reynis. The world will mourn the loss of your wisdom!"

Orator Salothan: "Beleth! You were like my own shadow, my will made manifest. My burdens are my own now."

When summoning skeletons, she may say:

Orator Salothan: "My strength is measured in loyalty! Faithful, heed my call!"

There is one Achievement associated with this character:

This Elder Scrolls Online-related article is a stub. You can help by expanding it.
Retrieved from "https://en.uesp.net/w/index.php?title=Online:Orator_Salothan&oldid=2398495"
Categories:
Hidden categories: