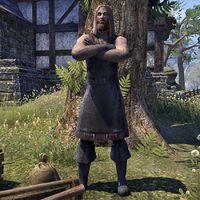 Knarstygg is a retired Nord adventurer found at the ruined plantation of his friend Dro-Dara. He was the fighter of his old adventuring party.

When he is rescued in Old Adventurers:

Knarstygg:"You fight well! Thank you for freeing me, friend!"

Knarstygg can be found again, just outside the storehouse.

"Ah, the young adventurer again. You remind me of the old days. So many stories I could tell, but you'll want to be leaving, of course.
Well, we might be heading out too. Janne might be right about a curse here. Speaking of Janne, have you seen her?"
Janne left. Dro-Dara thinks you should all leave.
"He does? Imagine that. I was trying to think of how to convince him!
That settles it then. If we're hitting the road though, I'll need my old gear. Recovering it will be easier said then done."
Is there some way I can help?
"There is. If I had my armor, my helm, and my axe, I'd do it myself, but that's the thing.
When we retired here, I buried all my adventuring gear by the levee. Would you be willing to go out and get it for me?"
I'll get your gear. Wait here.

After accepting to help, Knarstygg can be questioned further.

"More I think about it, the more I wonder why we stayed here this long. A true Nord dies with his axe in hand, not a pitchfork.
Besides, this is more swamp now than farm. I spent years building that levee. Damn ogres!"
Why did the ogres break the levee?
"I suppose they were thinking just to leave destruction in their wake.
Even if they had sacked Wayrest, it's not like they planned to settle in these parts."

Once all his gear has been recovered:

"Now there's a sight for some sore old eyes. I missed this stuff.
You've done me a great favor by getting it back."
I'm glad I could help.
"Probably doesn't look like much to you, but this helm and armor withstood the blows of the Orc warlord Nahkdul, a Nord killer at Farrun. This axe lopped off that monster's misshapen head!
I'll drink to those days. And more of them to come!"

"I feel like a new man already, friend. Sooner we hit the road the better, far as I'm concerned.
Dro-Dara says he's just about ready. Now we just need to round up Murk-Watcher. I hope she'll come."
Why wouldn't she come?

"Murk-Watcher has aged much in these last few years. She often seems confused about where she is.
She can be incredibly stubborn too. Perhaps you could approach her about leaving?"
I'll talk to Murk-Watcher
"Ever since you freed us, Murk-Watcher has been sitting out there, just staring at those crocodiles.
It's strange. They've been leaving her alone. Maybe she's worked some of her old charms on them."

After helping Murk-Watcher, Knarstygg can be found in the storehouse alongside Dro-Dara, dressed in his old armor.

"How do I look? had to stretch the leather straps a little to make the armor fit, but think I still make quite the impression.
I'm ready for adventure...again. Perhaps we'll cross paths in the bottom of some dungeon, eh?"