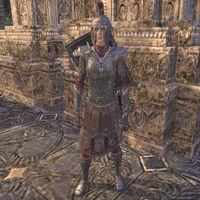 Centurion Ancrus is an Imperial officer of the Shields of Senchal. She is located outside the Palace in Senchal. Centurion Ancrus is first seen denying Sai Sahan a meeting with General Renmus, but later grants him entry to the palace once the necessary requirements have been met.

When you first enter the Senchal Wayshrine square, you'll hear Ancrus saying parting words to Sai Sahan before walking away.

Centurion Ancrus: "The general doesn't see anyone without an appointment."

After gathering the papers, you and Sai Sahan will be stopped by Ancrus at the door to Senchal Palace:

This Online-related article is a stub. You can help by expanding it.
Retrieved from "https://en.uesp.net/w/index.php?title=Online:Centurion_Ancrus&oldid=2157921"
Categories:
Hidden categories: