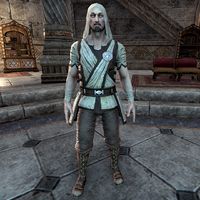 If you speak to him after receiving the Star-Gazers' blessing, he welcomes you, "You are very welcome among our order, my new friend. It's a frightening time and we could use allies like you. Feel free to get to know the other Star-Gazers here. I'm sure some of them could use your help."

When you speak to him after completing [verification needed — which quest(s)?], he will say, "You're making a name for yourself around here already! Good, good. Frail, old scholars like myself must rely on people of action, especially in such difficult times."

After you have completed The Missing Guardian, Caecilus will ponder, "All this time, the Thief was right here. I always thought there was something odd about Hara. She knew so much for one so young. Still, never in a thousand years would I have guessed it."

You can ask Caecilus to tell you more about himself, the star signs and Hara -

"Nobody. Just an old scholar with no particular skill except tracking the stars.
I always believed that the stars bless heroes with the gifts to face the troubles of their time. But now, the stars themselves are troubled. I'm afraid this is the end."

I want to know more about the star signs.

"Of course. There are thirteen star signs. The Warrior, The Mage, and the Thief are called the guardians because they each govern three charges.
They watch over Tamriel. Distant, impersonal, but, I like to think, benevolent."

"The Serpent. Originally, there were only twelve signs, but the Serpent usurped his place in the night sky.
He does not appear at a fixed time, but darts chaotically through the seasons, attacking the guardians' charges."

What can you tell me about Hara?

"She's very wise and very knowledgeable about the stars. She came to us only a short while ago, after living in seclusion and studying the old Yokudan astrological traditions.
The extent of her knowledge is impressive, and she's been very helpful."

She seems to have a lot of authority for being new here.

"Many people come to Craglorn to live and study in peace. We are fortunate that Hara saw the signs when she did.
Without her help, Belkarth would have been overrun along with the rest of Craglorn when the troubles started."