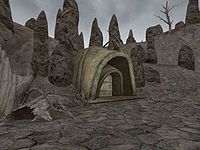 Omalen Ancestral Tomb is a large tomb in the northern Ashlands, north of Kogoruhn and southeast of Valenvaryon.

The tomb is located north of Kogoruhn, and south of Ebernanit. This tomb has 12 undead and a rat as guardians. The books Homilies of Blessed Almalexia and Death Blow of Abernanit, quite a few ingredients, and a key to a locked door is about all the loot to be found here. There's a corpse with a master lockpick on it and a scroll with its last words by its side. The body of "Indiana Jones" can be found here. Apparently a rock fell on his leg leading to a slow and painful death. A scroll reveals his last thoughts.

There are three known members of the Omalen family: 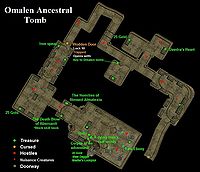