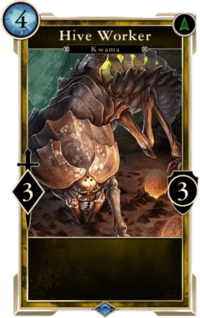 A card that can be trained

Training is a discontinued game mechanic wherein untrained cards in players' collections were converted to trained cards. The system was abandoned following the transition from Dire Wolf Digital to Sparkypants Studios. While it is not possible to obtain any of the untrained cards anymore, they can still be encountered in AI battles without their green arrow. This page is kept for historical purposes.

Training could be performed on cards marked with a green arrow in the upper-right corner. This was a one-time morph, and could either result in a straight upgrade or a choice between two different morphs. When you trained a card, all of the copies of the untrained card were converted. When you had the opportunity to train a card, you could not postpone or defer doing so. Once you had no copies of the original card after it was trained, it would no longer appear in your collection.