This article is about the old rules for Gauntlet mode. For the current game mode, see Gauntlet.

Gauntlet is a game mode in The Elder Scrolls Legends, and consists of tournament-style events that you enter with a pre-constructed deck of your own that you will use for the duration of the event. Gauntlets are announced by the developers and can be held several times each month, but are only available during the weekend. Many gauntlets have special rules that apply to all players in the event. The card pack prizes are usually from the latest expansion. 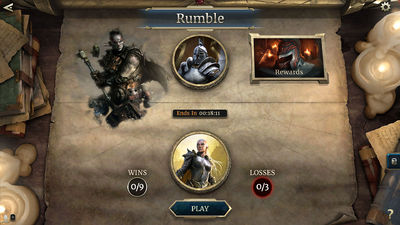 In Rumble Gauntlet, you play until you reach either nine wins or three losses. Entry costs either 150 gold or an Event Ticket. The first Rumble Gauntlet ran for the weekend of June 10-12, 2017.

Rumble Gauntlet prizes are as follows: 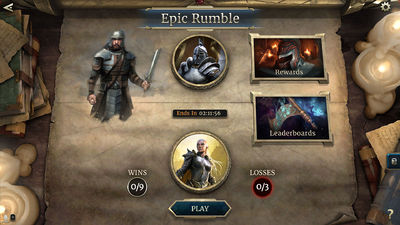 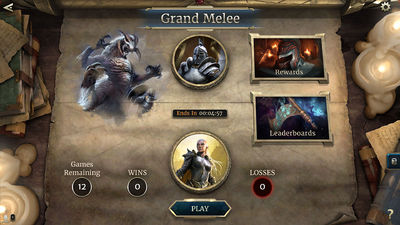 In Grand Melee, you play for 12 rounds, and your prizes and your leaderboard ranking is determined by your win rate and the win rates of your opponents. Entry costs either 1000 gold or 6 Event Tickets. The winners' decks are published to the Legends website.

Prizes for the number of wins are:

Prizes for the top 100 on the leaderboard are:

In addition to the rewards listed above, participants also received a playset of the following alternate art cards:

Special Rumbles are similar to Epic Rumble Gauntlets where your first three or four runs are counted toward a leaderboard score, but there is only a maximum of 7 wins per run. The cost of entry for each Special Rumbles is 150 gold or 1 Event Ticket. The rewards for the amount of wins are a bit different and the top 2000 players on the leaderboard receive additional prizes. Your leaderboard ranking is determined by your win rate and the win rates of your opponents.

Prizes for the number of wins are:

Prizes for the top 2000 on the leaderboard are: