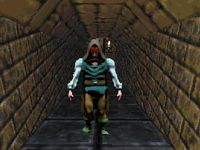 The Ancient vampire crawls up from the dungeon depths 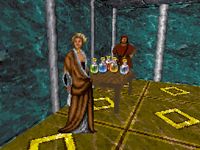 "You can't really have too much power, can you, (player's first name)? You look a lot like someone I used to know -- but that was back during your First Era, so it couldn't very well be you, could it? Now then, if you'd like, I can give you a little shield of mine called the Spell Breaker. It will certainly give you the power you want, but first, I need a little proof of your seriousness."

"Excellent. It's wonderful seeing a (player's race) with clear objectives. So rare in this day and age. Now then, there's this Ancient vampire, frankly a vampire, who I know you'd hate. Thoroughly stupid, unattractive, and mean-spirited sort. He needs to go on a one-way trip to you-know-where. Then, after you've taken care of that unpleasant business, go visit my friend, (worshipper's name), a charming (worshipper's description), who will meet you at (building) in (town). Now, I don't want to rush you, but I can't ask (him/her) to wait more than (time limit) days for you. And just getting to (dungeon) may take a good while, so you ought not dawdle along the way. (Worshipper's name) will be happy to show you the Spell Breaker. Now, I've prattled on long enough. It's been a pleasure.

"Changed your mind, eh? Don't feel bad. It's a sign of maturity to be brave enough to say no. Just give me a call when you change your mind. I know you will."

Travel to the dungeon named by Peryite and enter it. Find the Vampire Ancient lurking within, and destroy it. There may be multiple enemies of this type inside the dungeon, but you must destroy the specified target for the quest to be successful. When the target Vampire Ancient dies, a message appears:

You have slain (vampire's name). Peryite's revenge is complete.

Once you have taken care of business, travel to the town and building named by Peryite and meet the Daedra Prince's worshipper for your reward.

Speak to Peryite's worshipper after the Vampire Ancient is dead and be told:

If you ask an NPC about Peryite's worshipper, you may be told:

If you ask an NPC about the Spell Breaker, you may hear: