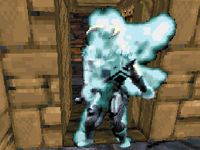 Send a Frost Daedra back to Oblivion

The Cunning Prince of Oblivion[edit]

Mehrunes Dagon speaks to you:

Travel to the dungeon named by Mehrunes Dagon and enter it. Once inside, find and kill the Frost Daedra. There may be multiple enemies of this type within the dungeon, but you must destroy the specified target to successfully complete the quest. When you have sent the soul of the Frost Daedra back where it came from, a notification appears:

Once your task is complete, travel to the town and tavern where Dagon's worshipper waits with your reward.

Speak to Mehrunes Dagon's worshipper after the Frost Daedra has been destroyed and hear:

"Ah, you're (player's name), yes? (worshipper's name) here. I understand you successfully corrected one of Mehrunes Dagon's straying children. Excellent. Well, here is The Mehrunes Razor you were promised. Enjoy it. I don't think that we'll meet again. Goodbye."

IF you ask an NPC about Mehrunes Dagon's worshipper, you may hear:

If you ask an NPC about The Mehrunes Razor, you may be told: