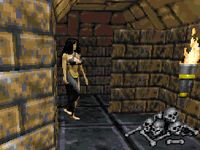 The Daedra Seducer who betrayed Malacath 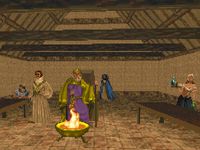 A local ruler is investigating a murder 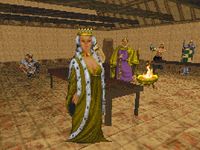 "Yes, I know someone else who was interested in power. A little panikosa in Oblivion who dreamed of power, who asked me to supply it with the beauty and grace it had always desired. And when I made it beautiful, it fought against me, resisting my will as if I had not made it. Perhaps you are the same. If I made you strong and beautiful, you would respect the gift I gave, would you not?"

"I believe you, (player's name). In exchange for the death of the treacherous seducer I once trusted, I will give you the Volendrung, my most prized possession in your world. It will make you most powerful indeed. You will find the loathed creature in (dungeon). Slay her and meet my dear and trusted subject (worshipper's name) in (town). I will tell (him/her) to meet you at the palace there for convenience. I don't think the whole affair should take more than (time limit) days if done as efficiently as it should. Go then into the world and do my bidding, (player's name)."

"Witless (player's race), don't you even know enough to lie? Do not waste my time with your pathetic yearnings."

Travel to the dungeon named by Malacath and enter it. Find the offending Daedra Seducer within, and destroy her. There may be multiple Daedra within the dungeon, but when the target dies, a notification appears:

If you search her corpse, you will find a note containing the following message:

(Daedra Seducer's name),
Malacath wishes (victim's name) dead.
(his/her [sic]) agents have uncovered one too many of
our plots. (he/she [sic]) must be stopped before all
our plans for (region) are ruined. You will
find (him/her) in the Palace of (town). Make
sure (his/her) death cannot be traced back to us.
Once you have carried out the assasination [sic],
wait for me in (dungeon). I will bring
your reward and your next assignment from
Malacath.

To complete the quest and receive Volendrung, travel to the town where Malacath's worshipper waits. Enter the Palace and speak to the worshipper for your reward. However, you may also investigate the assassination mentioned in the letter for an additional reputation boost.

Should you wish to investigate the matter, travel to the town named in the letter. If you ask around for rumors, you will learn the name of the local ruler, and that he or she has been investigating the assassination. Locate and enter the Palace. Find and speak to the local ruler, and a prompt appears asking if you wish to hand over the letter you found. Say "yes", and the Noble exclaims:

"(Oath)! (Worshipper's name) was behind (victim's name)'s death? And involved in a daedra plot as well? We may never have solved this murder without your help, (player's name). Your loyalty to the (region ruler's title) will not be forgotten."

Deliver the note and you will gain +15 reputation with the current region and +7 with its associated factions. Afterwards, you can still travel to Malacath's worshipper and collect your reward.

Malacath's worshipper speaks to you:

"So you're (player's name). Malacath described you perfectly. Good work with old (Daedra Seducer's name). She just didn't know how to keep her mouth shut, you know? Anyhow, here's the Volendrung. Not a halfbad smasher. And who knows? You might have to use it on Malacath himself one day. I'm joking ... of course."

If you kill the Daedra Seducer and speak to Malacath's worshipper within the time limit, you will gain reputation as seen below.

If you fail to complete the quest within the time limit you will lose reputation as seen below.

If deliver the letter to the Noble, you will gain reputation as seen below.

If you ask an NPC about Malacath's worshipper, you may be told:

If you ask an NPC about the assassination victim, you may hear:

If you ask an NPC about the Noble, they may tell you:

If you ask an NPC about the Volendrung, they may say: