"Good day. (Employer's name) is the name. You may have heard of me lately. Somebody has been filling the streets with horrible lies concerning my private life. I'll pay (random gold) gold to the person who puts a stop to them. What do you say?"

"The malicious, downright libelous rumors about me must cease and desist immediately. I need someone anonymous to trace these rumors back to their infernal source. Would (random gold) gold pieces be enough to buy your investigative skills in this matter?"

"You will? Excellent. Come back when you have some proof of who's behind all these nasty rumors about me. I'll give you the gold then. If you're not back within a month, I will assume that you have failed."

"I guess you heard the one about me not keeping my promises. Damn lies!" 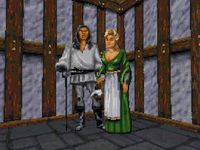 The local gossip is filling her friend's ear with scandalous tales 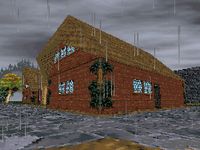 Getting into your employer's home may require a little burglary 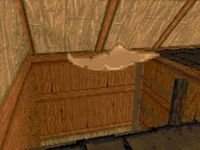 The letter, about to be blown down the ladder well 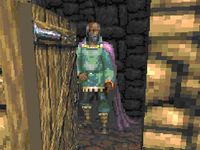 The lover will be grateful for the rescue

Ask around in town about your employer and you will eventually hear some of these rumors. Keep asking until you are given some information about what is going on. If you can access a Spymaster through either the Thieves Guild or Dark Brotherhood, this will be much easier. Eventually, you will be given the name of a tavern. Head there and locate a local gossip, who blurts out:

This letter sounds like a clue, but your employer will not divulge anything if asked. To continue, ask around about your employer further, and eventually someone will reveal where they live. Asking about the residence will eventually point you in the right direction. Head to the residence, which may be locked up tight; if so, either pick the entrance door's lock, cast an Open spell, or break the door down. Enter the home and search for the letter. Take it and read it:

My words will be quick. (Lover's name) is too
much as you have said, and a little scare
may be what is needed. I'll be leaving on a trip
tonight, so tomorrow at sunset
you should take him. I'll be in touch again,
but I don't imagine we will need to continue
for more than a week.

With the letter as evidence of something untoward going on, head back to your employer. When confronted with its contents, your employer will plead:

"What?! What is this? Oh my... Please, please don't kill me! My sister put me up to it...I didn't mean any harm. She only asked that I scare him a little, you know, make him appreciate her more. I know I shouldn't have done it. Now I'm in over my head... you see, I paid a group of bandits to take him away and lock him in (dungeon). I figured this would scare him enough... but he hasn't returned! I went too far...I know. Please...you must rescue him! I thought I could cover it up, but I can't any more. You've got to rescue him, if he's not back when my sister returns...well, she'll kill me for sure!"

Head to the dungeon he just mentioned and find the sister's lover within. When you have found him he will greet you by saying:

"Thank (god's name) someone has found me! I thought I'd never get out of here. I've been wandering around these passages for days, trying to stay alive. What is that you say? (Sister's name) and (employer's name) are behind all this! Well, you get me back to (sister's residence) in (town) and I'll reward you well. And then I will take care of those two!"

Escort the lover to the sister's house within the time limit to receive your reward from him. If you fail to return him to in time, he leaves without giving you a reward and says:

(Lover's name) says, "Thanks for your help, (player's name), but I'll find my own way home from here."

Upon arriving at the sister's home, her lover will thank you and say:

"You have been honorable, (player's name). I thank you. Take this (magic item), my most prized possession, it is the least I can offer. We are friends forever, and I owe you. Leave (employer's name) and (sister's name) to me, I have something planned for them."

If you ask an NPC about the sister's lover, they may tell you:

If you speak to the quest giver while this quest is in progress, they may say: