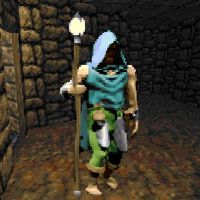 Slay the spellsword as a show of strength 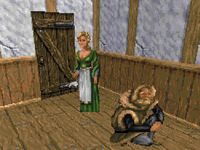 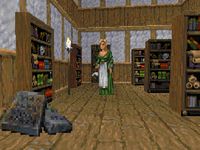 "Power, hah! Would a Mundus-crawling (player's race) know what to do with real power? You mean you want to be able to bully a few other mortals around, don't you? Well that can be arranged. I want you to show me you have the mettle to actually use what I give you. Will you kill someone for it?"

"Well, that's a start in the right direction, anyhow. The spellsword I have in mind for you to butcher for power is (spellsword's name), a perfectly charming and charitable ass who's been annoying the hell out me for years. You will find (him/her) at (his/her) fortress, a place called (dungeon). Now, don't think that just because (spellsword's name) is a precious toff, (he/she) doesn't know how to fight. I want to make you work a little for this gift. After the murder, go meet (worshipper's name) my agent in (town). Just look for a (worshipper's description) hanging out at (building). And don't keep (him/her) waiting. I'll tell (him/her) you'll be there in (time limit) days. That ought to be plenty of time. I'll be watching."

"Pah, you make me sick. Don't summon me again, (player's first name), unless you grow up or are looking for a fight."

Get out of (dungeon) immediately!
I have learned that Boethiah has
arranged to have you killed. We
can discuss your imprudent behavior
another time, but for now you should
go to our usual meeting place. When
I have completed the arrangements for
getting you out of (region), I will come
meet you myself.

Watch your back,
(Friend's name)
(Town)

If the spellsword eluded you, travel to the town named in the letter. Ask around to learn the location of the spellsword's friend. Head inside the building and speak to the friend, a random female character. She will say:

"How did you get in here ... (Oath)! I knew (spellsword's name) would get me killed one day. Listen, since (he/she) doesn't value my life enough not to leave my letter lying around, (he/she) isn't worth protecting any longer. You can find (him/her) in (new dungeon). I wash my hands of (him/her) at last."

Travel to this new dungeon to find and kill the spellsword before the overall time limit expires.

No matter which dungeon you ultimately must go to, find and kill the spellsword within. You may encounter multiple enemies of the same type, but you must kill the specified quest target in order to successfully complete the quest. When the target spellsword dies, you receive a notification:

You have kept your part of the bargain with Boethiah -- (Spellsword's name) is dead.

Once your task is complete, travel to the town where Boethiah's worshipper waits and receive your reward.

Speak to Boethiah's worshipper once the spellsword is dead and be told:

"So, you're (player's name). Hmm, you're not as puny as Boethiah suggested. Take that as a compliment. Also, take this. Boethiah crafted this Ebony Mail. She thinks it should aid you in your search for power. She's interested in you, that's for certain. I know from her smile when she said the word 'puny."

If you ask an NPC about Boethiah, you may hear:

If you ask an NPC about Boethiah's worshipper, you may be told:

If you ask an NPC about Ebony Mail, they may say: