The UESPWiki – Your source for The Elder Scrolls since 1995
< Daggerfall: Quests: Temples
Jump to: navigation, search 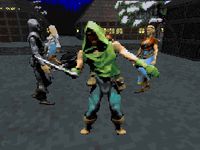 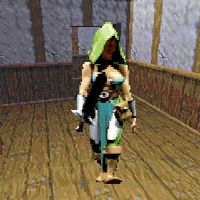 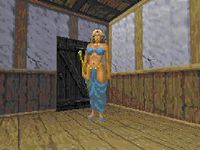 The priestess has your gold if you have the item

"Blessings upon you, (player's name). (Temple) needs you to run an errand for us. This (religious item) needs to be delivered to (priestess' name) within (time limit) days. You will receive a temple fee of (random gold) gold pieces. Can you do it for us?"

""Here is the (religious item). Take it to (priestess' name) of (building) in (town). Oh, I almost forgot to mention that a rival temple may send out thugs to stop you."

"Sigh. I shall have to find some other temple servant to perform this task."

This quest is a simple delivery task. Travel to the town the quest giver mentioned to you. You may run into a thief or a spellsword on your way, both of whom want to steal the religious item from you, and who shout:

"That (religious item) will never make it to (priestess' name). Instead, I shall deliver them your head!"

Take care of them if they show up, or flee. Locate the target building, find the priestess inside, and give her the religious item to complete the quest.

Once she has possession of the religious item, the priestess says:

"(Temple god)'s favor upon you (player's name). This (religious item) is sorely needed here. I understand that you are to be given a temple fee of (random gold) gold pieces."