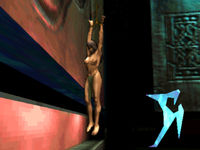 Vatasha Trenelle is an initiate who entered the Battlespire shortly before you did, and was trapped during the Daedric invasion. She is the friend and companion who leaves you helpful letters and items, as you follow in her footsteps through the chaos. Vatasha is found in Dagon's Hunting Lodge, held prisoner by the Daedra Prince Mehrunes Dagon in his inner sanctum behind a Hekem Sigil of Warding.

[[She does not respond. She seems to be unconscious, or in a deep sleep.]]