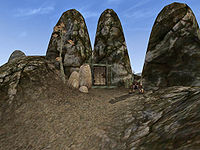 Abebaal Egg Mine is on the north side of the island northwest of Tel Branora, run by Telvanni and staffed by slaves.

It is a moderately sized, Telvanni-operated egg mine located in southeastern Vvardenfell on Azura's Coast between Tel Branora and Molag Mar.

The mine is rich in kwama eggs but doesn't contain much in the way of other loot. It is currently worked by six Telvanni-owned slaves. The slaves are in a state of revolt against the mad demands of Mistress Therana, and as a member of House Telvanni, you are sent to the mine to quell the uprising.