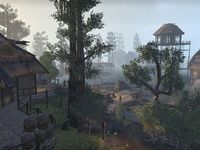 Lilmoth is one of the eight major cities in the province of Black Marsh,[1] serving as the most centralized settlement in the region of Murkmire. Lilmoth is colloquially known as the "Festering Jewel of Black Marsh". It is a merchant city known for the sunken Imperial villas that were built during the Second Empire's hold over the region.[2] Unlike other cities, Lilmoth has no centralized government, and is instead ruled by a council of powerful merchants.[3]

Lilmoth is built on the southern point of the region of Murkmire, in the wetlands that make up the south-central coast and the river estuary that leads into Oliis Bay. Just outside of Lilmoth's northern gate is the rainforests that lead into the rest of the region, towards Bright-Throat Village and, eventually, the Keel-Sakka River. The land features minor settlements built by those native to or working in Lilmoth, such as the rice-producing Hereguard Plantation, one of the few Breton settlements outside Lilmoth.[3] Then there is the infamous Blackrose Prison, which is found further north towards the Dead-Water Village. Blackrose Prison is an Imperial fortress, surrounded by other abandoned Imperial settlements. The region also possesses many notable ruins, such as the Xinchei-Konu Monument, which was built during the time of Argonian civilization prior to Duskfall. The Monument is an ancient calendar that showed the Argonian's view of time. Another ancient ruin is the nearby Ixtaxh Xanmeer, the full name of which is the Ixtaxh-Thitithil-Meht. Lilmoth is neighbored by several other settlements, including Alten Meirhall to the northwest, and Rockpark to the northeast.[1] 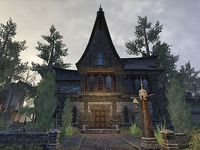 The Cyrodilic Collections in Lilmoth

Lilmoth is a walled-off settlement, surrounded by traditional Imperial walls for the most part, with Argonian walls facing the Oliis Estuary. Lilmoth is built over shallow waters, meaning large ships are unable to dock at the city and are instead required to anchor in the Southern Sea, remaining close enough to move goods. Despite the outward appearance of an Imperial settlement, ninety percent of Lilmoth's architecture is Argonian, using a style of building made for the marshes of Murkmire. These structures are supported by wooden stilts, which sometimes extend high into the air over the city. These high platforms connect to each other, slowly ascending from the ground to hover above the water and the marsh below. In comparison, Imperial homes built on that soil quickly sank into the swamp. Nearer the walls are a few intact Imperial buildings, such as the headquarters of Cyrodilic Collections.

There are several distinct parts of Lilmoth. Pusbottom, known as the ancient, gangrenous heart of Lilmoth, is a dangerous area which Lilmoth's criminal underground operates out of. Old Imperial Lilmoth is a district filled with ancient Imperial ruins, old encrusted villas festooned with vines, large bamboos, and sleeping palms. Shines, a harmless cousin of the Will-o-the-Wisp are known to loom around the Imperial ruins. Despite having no native Argonian tribe, Lilmoth possesses its own Hist Tree. The city is also home to a sunken shrine dedicated to Xhon-Mehl, the Ancestral Organ Lord of Lilmoth.[3]

Lilmoth was not founded by the native Argonians. It was built by the Lilmothiit, a nomadic race of vulpine beastfolk that lived across southern-coastal Black Marsh.[3][4] The name "Lilmothiit" may in fact translate to "one who is from Lilmoth" in Ta'agra. The Lilmothiit were nomadic, so whether they consistently lived in Lilmoth is unknown. The race eventually went extinct circa 2E 560 with the arrival of the Knahaten Flu.[5] However, at some point prior to this, Lilmoth had already become an Argonian settlement, ruled by a Priest-King/Queen. During the Blackwater War of 1E 2833, the Imperial General Lucinia Falco had begun a third campaign against Argonia, known as the "Falco Doctrine". Falco had temporarily recruited the pirates of the southeastern seas, and, in a combined effort with the Diamond Marines, the Imperial Legion was able to conquer the cities of Lilmoth and Archon. The Blackwater War ended in 1E 2837 when the Argonians surrendered to the Imperial forces of the Second Empire. With the Imperial acquisition came renovations to Black Marsh that made it more Imperialized.[6] Lilmoth later participated in the Four-Score War, during the reign of Reman Cyrodiil III. Warchief Ulaqth of Lilmoth was present at the Battle of Bodrum, commanding the right flank against the Dark Elves of Morrowind. The Second Empire was defeated at the hands of Vivec at Bodrum.[7]

By the mid-Second Era circa 2E 582, the Imperial villas built during the Imperial occupation had fallen into disrepair, having been claimed by the environment and replaced by typical Murkmire architecture. At this point in time, Lilmoth had become a bustling trade city with no centralized ruler. It was, however, ruled by a council of highly-influential merchants that operated out of Lilmoth. They tended to impose tariffs and employ guards to patrol Lilmoth's streets. Murkmire, in general, has a less-structured justice system than other regions of Tamriel. Local tree-minders and warchiefs often dealt with affairs in their own territory, whereas in Lilmoth, people often looked to their elders for guidance, such as retired Shadowscales.[3] Since its founding in 2E 572, the region of Murkmire, and by extension Lilmoth, were nominally a part of the Ebonheart Pact, one of the three alliances that fought in the Three Banners War.[8] However, tales of the conflict were only spread through sailors, as the warfront was many miles away from Lilmoth. As such, there was little interest or support for the Pact in Murkmire. Regardless, Pact recruiters were present in Lilmoth at this time.[9] In 2E 582, an Imperial organization known as Cyrodilic Collections had established a headquarters in Lilmoth, seeking to uncover the ancient history of Argonia prior to Duskfall, as Murkmire was the origin of many such relics.[10] The organization ultimately succeeded in uncovering the mystery of the Root-Whisper Tribe and the Remnant of Argon, resurrecting that tribe in the process.[11] 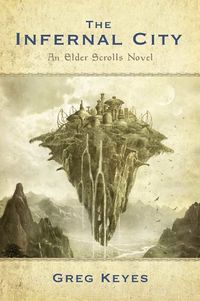 In 3E 80, the Warlady of Lilmoth was named Ioa.[12] Up to at least the early second century of the Third Era, the city-state of Lilmoth had been ruled by a Priest-King/Queen. This changed circa 3E 109, when Prince Magnus Septim married Queen Hellena of Lilmoth, who had executed the previous Argonian Priest-King. Queen Hellena was known to have furthered Imperial interests in Black Marsh significantly. Following their marriage, Prince Magnus Septim became the King of Lilmoth.[13] Imperials had initially dwelled in Pusbottom since the Second Empire had established itself in Black Marsh, but subsequently moved away from what had become a slum in Lilmoth.[14] As of 3E 119, during the reign of Emperor Antiochus Septim, King Magnus and his siblings Cephorus I and Potema had held prosperous reigns throughout their kingdoms, holding good relations with other kingdoms and the greater Empire. In 3E 120, the War of the Red Diamond began, with the Kingdom of Lilmoth at the forefront, fighting with the rest of the Empire against Queen Potema's army.[15] In 3E 125, Argonian forces had moved across Morrowind and into Skyrim to face Potema's army on their home territory. In the same year, Queen Hellena gave birth to Pelagius Septim III. In 3E 127, King Magnus faced Potema's forces at the Battle of Falconstar, but lost and retreated.[16] Years later in 3E 137, King Magnus, alongside Emperor Cephorus I, defeated Potema in a siege at Solitude. In 3E 140, King Magnus was named Magnus I, Emperor of Tamriel.[17]

Lilmoth in the late Third Era and Fourth Era[edit]

Circa 3E 173, the Hist tree of Lilmoth was purged by the other Hist trees in Black Marsh after it went rogue. A new Hist tree replaced it, growing from the roots of the old one that was killed. These roots eventually spread all the way into lower Lilmoth.[14] During the Imperial Simulacrum in the late Third Era, the city-state of Lilmoth was ruled by Queen Artomeda. It had a rivalry with Archon and Blackrose.[18]

After the Oblivion Crisis of 3E 433, the An-Xileel had risen to prominence across Black Marsh. The An-Xileel in Lilmoth became the only ones able to commune with the Lilmoth Hist tree, restricting access to only fellow An-Xileel and wild Argonians. The Synod had no conclave in Lilmoth, nor any presence at all for roughly 400 miles.

Circa 4E 40, the floating city of Umbriel invaded Tamriel, appearing somewhere over the Southern Sea, having seemingly been guided there by Lilmoth's Hist tree. The first victims were the residents of Lilmoth, who were overwhelmed by undead sea creatures and joined Umbriel's growing army of undead as the city passed overhead. It transpired that the Hist had controlled the An-Xileel and used them to help grow Umbriel's undead army. Mind-controlled An-Xileel and undead creatures attacked Lukiul Argonians and foreign races indiscriminately. The "Slaughter at Lilmoth" culminated in the destruction of the city, as Umbriel's army expanded and marched towards Morrowind and eventually the Imperial City.[14]