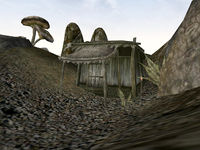 Big Head's Shack is a small shack on an island to the north of Ald Redaynia.

Big Head lives in this remote hut and knows far too much about a certain fork. There is a varied selection of spears in the left back corner of the hut, including a steel shardskewer, a dwarven halberd, an iron spear, a steel halberd, a steel vipercleaver, a silver flameskewer, an iron halberd, a silver sparkskewer, and an iron flameskewer, all of which can be taken without incurring a bounty. Also on the left side of the hut is a table full of clutter and the Fork of Horripilation and some containers full of clutter. On the right side of the house, there is a bedroll owned by Big Head, a few barrels and chairs stacked on top of each other, and some clutter. Big Head has also stacked several chairs on top of each other in one corner of the shack.