Sci' Taar is a Khajiit that was abandoned by his original (unknown) parents, and raised by the Nord couple Gregor and Layma Shakara. He is the definition of "hyper". The only thing that calms him down is death, or... Whatever. He doesn't care. At all. He's already bouncing off the walls, and there's nothing in Mundus to slow him down.

o Gregor is the name of a follower you can gain. There is no explanation of this, as I unwittingly named his father Gregor. There is no connection in between the NPC and my fictional character.

o His name is pronounced She- Tahr.

o He is a master of archery, but won't admit it.

o Because he was raised by the Nords, his voice cracks a lot and sounds gravelly. This is because his voice didn't adapt correctly to the Nordic accent. 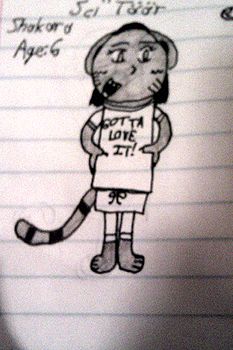