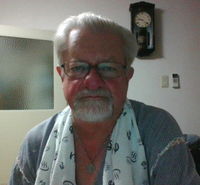 Age: Born in a year of the Snake in the Chinese zodiac. A third-grader during the Cuba Missile Crisis. Birth stone: Sardonyx or Peridot. Born on the Transfiguration. Thursday's child (has far to go).

Hometown: Grew up where "Jo-jo left his home".

Occupation: Retired after nearly 40 years of teaching in Tokyo. Didn't abandon Japan after the March 11, 2011 earthquake.

Claim to fame: Absolutely convinced that guy I met in the Shakey's in Harajuku back in the 1980s was Vladimir Putin on vacation. (An uncommonly charismatic fellow.)

Favorite Saying: "My mind is aglow with whirling transient nodes of thought careening through a cosmic vapor of invention." (Lamarr in Mel Brooks's Blazing Saddles [1973])

Pretty bad! I was introduced to Morrowind (Sept. 2005) by a younger brother and would wake up some mornings wondering, "Where am I? In Balmora?" I realized that there is an ever so fine line in our minds between what is real and what is not, and got pretty spooked. For this reason, I decided very early never to do anything in the game that I wouldn't do in the real world. (Petty thievery and provoking fights are acceptable as long as they advance the game.)

However, having been fascinated with knights and castles as a kid, from watching the old Robin Hood series on TV, I had to wait until I was 52 finally to be able to indulge in my own swordplay, but the game still didn't sit well with me. One of the things I had to do early on was fetch the Dwemer Puzzle Cube from Arkngthand, but Snowy Granius's skeletons struck terror in me.

My "AHA!" moment came when I left Snowy Granius on his bridge and went along the road between Caldera and Ald'ruhn where I found Pimenie and promised to take her to Gnaar Mok in return for the Boots of Blinding Speed. Instead I led her back all the way to Arkngthand.

There we faced Snowy at the other end of the bridge. I took out my bow and aimed just above his head and hit him, but he still had enough health to conjure up a skeleton. I rushed past the skeleton and cut Snowy down with a sword while Pimenie dealt with the skeleton. It was an indescribable relief to see him go down like a bag of spuds. I heaved a cyber-sigh and wiped away the cyber-sweat. And from there I took Pimenie to Gnaar Mok as promised.

When I told my brother my e-mail what I'd done, his response was, "You can't do that?!" I asked why not. He: "She's a freaking NPC!" Me: "So?" All he could say was that it was, uh...interesting. From then on I was hooked on Morrowind, and it took a really long time to get unhooked.

And now that I'm getting into my dotage, it's become something of a never-ending "Renaissance Fair" that I still play off and on, like a home away from home that I can put away for a while when it gets old. But I was never much for story telling until this game set my imagination on fire, and if computer games offer no benefit whatsoever to the player, I would have to disagree on that count.

1. Don't be too fussy about the names of characters. Why can't an Argonian be named Mordecai Jones?

2. Try to write in readable English. Try to be grammatical and check your spelling.

4. Don't be hide-bound by Morrowind lore. As long as your story is believably set in Morrowind, you're doing fine.

5. A sketch is not a story, and journal entries do not make a good read. A story needs a buildup, a climax, and a resolution.

7. Try to shift places of action within a story so that you don't spend too much time in one place while something else is happening at the same time elsewhere.

8. Let the story write itself. Strange and unexpected things can happen, but that's perfectly okay. Surprise yourself--and your readers!

9. Meditate on ideas as soon as you wake up in the morning. Get up at 4 AM and bang out that idea, or it will be lost forever. Then you can go back to bed and sleep well.

10. Let outside stories be an inspiration. Even Boccaccio's Decameron can happen in Morrowind!

Bonus: Never give up!