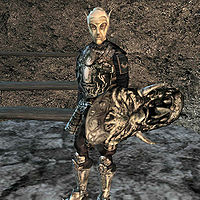 Yarnar is an Altmer drillmaster who can be found in Teran Hall. According to Fedris Hler, Yarnar and Armion have been hired by King Hlaalu Helseth to train a Goblin Army.

He is wearing an Orcish cuirass with matching greaves, boots, and tower shield, and an expensive shirt with matching pants, and he is wielding an ebony war axe. Aside from his natural weaknesses to fire, frost, shock and magicka, his natural bonus to magicka, and resistance to disease, he knows no spells.