The UESPWiki – Your source for The Elder Scrolls since 1995
< Morrowind: Tes3Mod: Tamriel Rebuilt: Places: Caves
Jump to: navigation, search 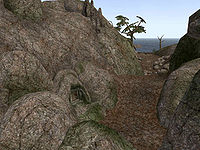 Samapwi is a deserted cave at the southeastern end of the Boethiah's Spine.

Head northeast out of Alt Bosara and follow the road as it curves around towards the north. After a short distance, a cutting will appear on your left. Follow this west and the entrance to Samapwi will be found on the right-hand side of the canyon.

Inside, the cave appears once to have been a mine that has become flooded. The corpses of five drowned miners and the skeletons of two others suggest that the flood took place very quickly. It's not clear what was being mined, however, as no minerals exist in the cave. In fact, there is no treasure at all. 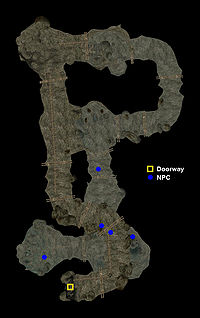