The UESPWiki – Your source for The Elder Scrolls since 1995
< Mods / Morrowind: Tes3Mod: Tamriel Rebuilt: Places: Regions
Jump to: navigation, search

The Mephalan Vales are a complex maze of canyons often wreathed with fog, which even the high ideals of the Tribunal have failed to fully penetrate. The local Indoril rulers lack a unified vision and feud with each other, while ancient forces continue to spin their plots unseen. This treacherous terrain of the Vales forms a natural northern border to the territories of House Indoril. Winding paths connect the fortresses of Ammar and Akamora, while ghosts, outlaws and worse dwell in hidden valleys and in the ruins of Dun Akafell. — Tamriel Rebuilt 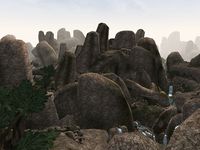 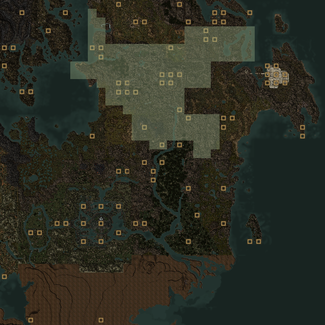 Map of the Mephalan Vales region

Mephalan Vales is a large mountainous region in the Mournhold District of Morrowind. It is a humid and rocky region that extends the Boethiah's Spine southward.

Its largest settlement is Akamora. The Mephalan Vales border the Sacred Lands to the east, Nedothril, Lan Orethan, and Alt Orethan to the south, Sundered Scar to the west, Azura's Coast across the Inner Sea, Helnim Fields and Boethiah's Spine to the north, and just barely the Padomaic Ocean to the northeast.

A list of places found in the Mephalan Vales region.

* This place is technically in Azura's Coast, but is listed here because this is the closest Tamriel Rebuilt region.

This Tamriel Rebuilt-related article is a stub. You can help by expanding it.
Retrieved from "https://en.uesp.net/w/index.php?title=Tes3Mod:Tamriel_Rebuilt/Mephalan_Vales&oldid=1924995"
Categories:
Hidden categories: