The UESPWiki – Your source for The Elder Scrolls since 1995
< Mods / Morrowind: Tes3Mod: Tamriel Rebuilt: People / Merchants
Jump to: navigation, search 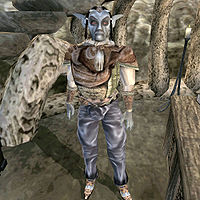 Aresthi Brendu is a Dunmer trader who owns his own shop in Port Telvannis. The small mushroom building is found exactly in the south-western corner of the city, just to the left when entering town from The Avenue.

He sells a relatively cheap and generic variety of wares, ranging from armor to clothing, from weapons to potions and from ingredients to household clutter. The only interesting items for sale are the book The Necklace, a Scroll of Hellfire and a relatively rare Orcish Mace; although you'll only be able to purchase the latter if you first sell him a better item.