The tower itself is an expansive structure, with the central section encompassing four stories (each accessible only by levitation within). Two bedrooms and a small office branch off the third section and the mystically decorated chamber of Master Vaerin connects to the top floor of the tower.

On the first floor, Dilavesa Indalen offers alchemical trading services, while the mage, Fedura Sendal, watches over a shelf of trinkets on the second. In the west bedroom, Varasi Vaerin, the master's son, carries three different skill books, and in the office, the expensive potions, fine alchemical equipment and note with directions to all the Telvanni Councilors are notable treasures.

Guarded by the spellsword Vinryon Sendal, the Master himself stands on a flowery pedestal and carries a Daedric staff.

Sprinkled with a few housepods owned by commoners, the town offers a generous selection of services despite its humble size. On the left side of the waterfall Favana Selethi sells clothes, and above her Geroth Enlaris sells scrolls and offers enchanting services. On the right, the Weaponsmith Atherios Adirion can perform repairs and offers a selection of armaments.

At the foot of the tower is a modest general store where Fevras Beran sells a wide variety of goods.

Finally, on a separate hill to the north stands a cramped barracks where four guards stay the night crammed into the stuffy basement. 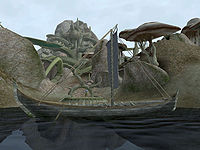 Masalmalu Mendas at the River Strider port at the north end of town can take you to Tel Mothrivra and Llothanis (from there you can connect to Port Telvannis). Hlavora Gilnith also offers transportation services along the lake on her longboat.

Places of Interest Around Alt Bosara[edit]