This article is about the NPC added by Dragonborn. For the NPC in Skyrim, see Torkild the Fearsome. 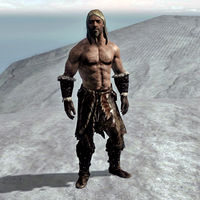 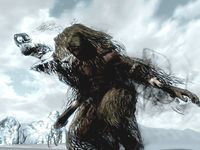 Torkild is a Nord werebear and the brother of Wulf Wild-Blood. Wulf will ask you to find Torkild, who will appear randomly while you are wandering Solstheim.

Torkild wears an outfit consisting of a hat, gloves, leather boots, and a random variant of fur armor. He also carries a letter addressed to his brother.

When you greet him, he'll say:

You'll now have two options. You can either tell him his brother is looking for him, to which he'll say:

"He hears the underslake of blood dust!"

Or you can ask if he's all right, to which he'll say:

"They can't talk the wave signs!"

Either way, Torkild will then turn into a hostile werebear and you will be forced to kill him. You can also find him already dead (e.g. killed by something else before you). Either way, you must take Torkild's letter to a thankful Wulf.

The only person whom you can ask about Torkild is his brother. You can ask Wulf how he became First Hunter. He will tell you, "In days past, my brother Torkild and I would share the hunt, but that was... long ago." You can ask what happened to his brother, to which Wulf will say, "I wish I could tell you." He will describe Torkild: "He had a wild gleam in his eye, more than most. In my darkest times, I fear he fell in among the werebears of the glacier." Asking him what a werebear is will net you Wulf's negative view: "Twisted beasts, a curse of Hircine. True bears are noble and great creatures of the wild. But the daedra have no skill for creation, so they befile [sic] the All-Maker's workings. I've heard tell of men who, by curse or by heart's desire, become transformed into one of those vile things. It is a pitiable fate. And one that I fear has fallen to my brother." Wulf has no idea where his brother might have gone. "He set off from here so long ago, it's hard to say. Could be in Hammerfell for all I know. If you happen to cross his path, be wary. He was a fierce warrior as a man." He will also warn you about Torkild's abilities: "If he fell prey to his more bestial side, he could be deadly."

You can further inquire of Wulf about why he thinks his brother became a werebear. "He never felt the call of the All-Maker as I do. As we all should. We seek to live in peace with the land, but he had an eye for dominance and strength. For unnatural strength, you need look no further than the beasts of this island, mangled by the daedra. It's not a fate I would wish on anyone. And not what I wanted for my brother."