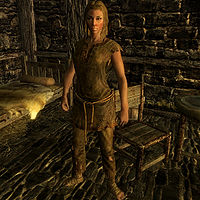 Threki the Innocent, in Riften Jail

Threki the Innocent is a Nord thief imprisoned in Riften Jail. She wears only a roughspun tunic and a pair of footwraps. She is one of three prisoners initially held in the Riften Jail; the two others are Molgrom Twice-Killed and Sibbi Black-Briar.

If spoken to, she claims she is innocent and blames the corrupt nature of the city for her sentence; she says she was thrown into jail only for speaking her mind about Ulfric Stormcloak, whom she believes to be a liar and deceiver. This evidently did not go well with the Stormcloak-sympathizing population.

When approached, she will show outrage over her imprisonment and can possibly say:

"Let me out of here, damn it! I'm not a criminal!"
"This is what happens to you when you speak your mind in this city."
"They threw me in here because I called Ulfric a liar; a deceiver."
"Ulfric doesn't care about Talos. He yearns for the throne of Skyrim and he'll say anything to rally people to his side."
"But now, because of Ulfric's greed, countless lives have been lost."
"On second thought, maybe I'm better off in here. At least I'll die with a clear conscience."