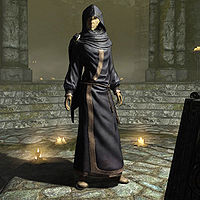 The Caller, an Altmer elemental mage, is the leader of a band of mages in Fellglow Keep. Unlike the rest of her group throughout the dungeon, she will not outright attack you on sight. As explained by Orthorn when you find him in the keep, The Caller is in possession of the three books that Orthorn stole from the College of Winterhold, namely Night of Tears, The Last King of the Ayleids, and Fragment: On Artaeum. He mentions that she was especially interested in one volume in particular, though he neglects to tell you which one.

As a key character in the quest Hitting the Books, she will remain standing at all times at her podium in the Fellglow Keep Ritual Chamber. She wears blue mage robes and a pair of boots. She knows a number of leveled spells from the schools of Alteration, Destruction, and Restoration.

Upon entering the final chamber of Fellglow Keep and meeting The Caller during the quest Hitting the Books, she will immediately engage in dialogue with you:

"So, you're the one who barged into my home and laid waste to my projects. How nice to meet you."
Who are you?
"Names no longer matter. You may refer to me as The Caller. Now, do you have a reason for making such a mess?"
I'm here for the books from the College.
"So you're just one of Aren's lackeys? That's disappointing. You show real promise. You come here, kill my assistants, disrupt my work... You've annoyed me, so I don't think I'll be giving you anything."

You then have several options of response:

If you tell The Caller that she can have Orthorn:

It's a deal. You can have Orthorn.
"Fine. Take your books and leave at once. If you ever come back, I won't be so gracious."

Upon taking the books, if you go up to her and attempt to talk to her again, she will simply say:

"You have what you came for. Now leave."

If she becomes hostile with you after the conversation with her, you will have to fight her and two atronachs. She will randomly teleport and swap places with the atronachs during the battle.