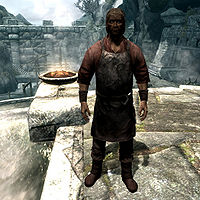 Tacitus Sallustius, an Imperial blacksmith, is the hapless apprentice of Ghorza gra-Bagol at the public smithy in Markarth. During your first visit to Markarth, you may hear Ghorza scolding him:

Ghorza: "Tacitus? What is this?"
Tacitus: "Uh, a nail?"
Ghorza: "Is that what you call it? In the Legion we would have called it 'useless.' Look how brittle the metal is!"
Tacitus: "I... I'm sorry. I just, well, the forge gets so hot and I thought...."
Ghorza: "You thought what? You would skip a step? Not heat the metal all the way through? Useless! Now do it again."

Tacitus wakes up at 8am and goes straight to the smithy with Ghorza. At 8pm they stop working and return to Understone Keep for a four-hour dinner until 12am, when they sleep there.

He wears a blacksmith's apron and a pair of boots. He carries an iron dagger along with a selection of common items and gold.

He will introduce himself by saying, "I'm Ghorza's assistant. I help her with the forge." He is admittedly not very confident in his ability and he can often be heard saying things like "Ghorza is the one you should ask if you need anything.", "I'm not very good for anything more than smithing nails right now." and "One time, I almost cut a finger off sharpening a blade. I hate blood." His lack of confidence will be shown further if Ghorza dies and he becomes the owner of the smithy as he will tell you, "I run the forge now. Kind of... scary.", "Making weapons and armor isn't like making nails at all.", and "You need a sword? Uh, how about a small sword? Nail-sized?" Upon ending conversation and he is near the smithy, Tacitus will say either "I should heat up the forge. Why does it have to be so hot?" or "Oh, goodbye then."

His master, Ghorza, does not think highly of him either, as she can be found saying, "Don't bother with Tacitus. Useless." and "You'd think an apprentice could forge a few hinges. Not Tacitus." However, she will still try to help him by asking you to find a book for him to read, as he "sure isn't learning by example."

Sometimes Tacitus and Ghorza will converse with each other:

Tacitus: "When will I learn how to forge weapons and armor? Isn't that my job?"
Ghorza: "Your job is to do what I say. And I say you have many nails and fittings to make before you even touch a blade. Now get to work."

Ghorza: "You strike your metal like a new mother giving her babe a light slap. Hit it harder."
Tacitus: "I'm sorry, Ghorza. I just... flinch, and uh...."
Ghorza: "If you can't pound the dusk out of your iron, it'll break when it's finished. Hit. It. Harder."