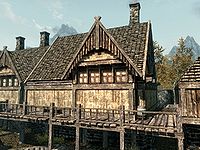 Snow-Shod Manor is a large manor in Riften, home of the Snow-Shod clan. It is located at the northeastern part of Riften, between Aerin's House and Riftweald Manor.

The entrance is kept adept-locked most of the time. Upon entering you are in a large open room with a flight of stairs up on your left, with stairs leading down to the cellar behind and several food barrels and sacks around the stairwell. A long end table is against the north wall, on top of which is a red, a purple, and two blue mountain flowers, as well as a bunch of lavender. There is a chair opposite the entrance against the east wall, with a wall shelf above holding two bottles of alto wine and a bottle of wine. To the right of the chair is a cupboard and a set of shelves in the southeast corner. These hold a bunch of lavender, a bottle of Nord mead, a bottle of wine, copies of Rising Threat, Vol. III, Killing - Before You're Killed, and Dwemer Inquiries Vol II, an iron mace, and a couple sacks. Against the south wall is an end table that holds a bottle of alto wine with a chair on either side, and against the west wall another long end table holding an iron sword and a mammoth tusk. 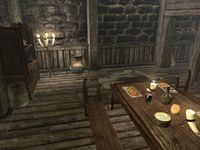 There is a doorway in the northeast corner leading through into the dining area, with a cooking pot on a stand against the west wall, a cupboard containing only clutter against the north wall, and a wooden dining table and benches in the middle of the room. On the table are three salmon steaks, a baked potato, two portions of grilled leeks, a bottle of alto wine, a loaf of bread, and an eidar cheese wheel. Hanging from the ceiling are two bunches of elves ear, a garlic braid, and a bunch of frost mirriam. To the west is the staircase leading down to the cellar.

At the bottom of the stairs, against the south wall is a large pile of firewood and several bales of straw, with a woodcutter's axe leaning against the firewood. To the east is a storage area full of various crates, barrels, and sacks. To the north is another storage area with a disused table and chairs, two sets of shelves, and a cupboard containing clutter. On the shelves are various pieces of cheese, two cabbages, a load of potatoes, and several loaves of bread. To the right of the cupboard is a small round table holding a mead barrel. 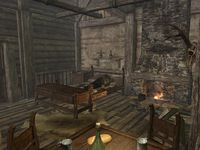 To the right at the top of the stairs is a landing and corridor, with a bedroom to the east belonging to Asgeir Snow-Shod, a double bedroom to the west shared by Vulwulf Snow-Shod and his wife, Nura Snow-Shod, and at the end of the corridor, by some barrels, sacks, and a crate, another bedroom; it would have been their daughter's room, who died after joining the Stormcloaks.

The parents' room contains an owned double bed coming out from the south wall, with a large coin purse and two loose coins underneath, an end table to the left, and a wall shelf above it. On the end table is a copy of Yellow Book of Riddles, and on the shelf are two bottles of wine. At the foot of the bed is a long end table, and to the right of the bed is a fireplace. Along the west wall is a pile of firewood, while in the northwest corner is a small square wooden table and two chairs, with a loaf of bread and a bottle of wine on top of the table. Against the north wall is a tall wardrobe containing clothes.