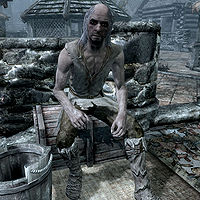 Snilf is a Nord living the hard life as a beggar in Riften.

Like the other beggar in town, Edda, Snilf has been given a bedroll in the slums of Beggar's Row and sleeps there every night between 10pm and 6am. After waking up, he heads to the market and finds his usual spot near Marise Aravel's stall. He then spends the entire day begging the townsfolk for money, at times complaining loudly about his situation and how people tend to ignore him because he is a beggar.

He wears ragged robes and matching boots. He carries a spare set of ragged robes, an iron dagger, and some lower-class items and gold.

He is seemingly angry and bitter about everything that happened to him and will, through his greetings, hint at his sad background story: "Sure, sure. I'm a dirty beggar... why would you want to even speak to me.", "To Oblivion with all of you! You rich piles of dung walking by us like we're not there! Pretending we don't exist! How dare you!", "You think you know pain? Do you!? Try watching your wife and daughter burn alive after they've been ravaged by brigands! That's pain, my friend.", "Edda... she's crazy as a loon, but at least she doesn't have the mind to realize what a horrible world this is. She's the lucky one." and a piece of advice; "Just leave Riften. Go far, far away and never return. This place is nothing but a rotten, stinking corpse that's sat in the sun far too long."

Being a beggar in Riften can be both beneficial and cruel. When Snilf tries to get a septim or two from the townsfolk, most of them will have a unique response that reflects their personality: