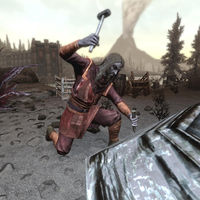 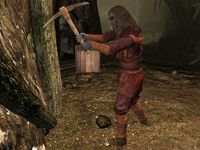 "Bralsa's been nice enough to show me how to swing a pickaxe."

Rirns Llervu is a Dark Elf living in Raven Rock who works at the local mine. Before the Earth Stone is cleansed, he will be seen working there mindlessly. He used to be a member of the Redoran Guard until his patrol was attacked by ash spawn. He ran all the way back to Raven Rock, where Captain Veleth discharged him for abandoning his fellow guards. Councilor Morvayn took pity on him and Bralsa Drel, and lets them live in one of Raven Rock's abandoned buildings.

He wears a set of red Dunmer outfit without the hood and shoes. He equips himself with a steel dagger and carries a selection of lower-class items and gold.

Before the mines have reopened, he can be found saying:

"Spare some coin for a lost soul?"
"Anything you can offer, please. I'm starving."
"Head back to the mainland, wanderer. There's nothing here but misery."

If you speak to him:

You appear to be in dire straits. What happened?
"I was one of the Redoran Guard under Captain Veleth's command. A few years ago, I was out on patrol with two other men when we were attacked by some ash spawn. They sprung from the ground with no warning and killed one of my companions instantly. I was so frightened, I ran all the way back to Raven Rock. Unfortunately, I'd left the other guardsman behind and he never made it. Captain Veleth discharged me from service. There isn't a single night that passes where I don't regret what I did, but it's too late for that now."

If you give him a gold coin, he'll say:

Ending conversation with him:

You can ask him if he knows someone named Miraak, to which he'll wonder, "Why do I recognize that name? It sounds so familiar... Did I have a dream about someone named Miraak?" Asking him what that means will have him continue, "I don't know. I keep thinking of the Earth Stone... Something to do with that."

When you free him from Miraak's spell by using the Bend Will shout, he will tell you:

"I'm asking myself why Miraak was making us build these shrines... and I'm afraid the answer will be far worse than any of us can imagine."
"That fetcher... making us build his shrines. If I could only get my hands on him..."

After you have reopened the mine, he'll be much more joyful, as he can be found greeting you with

"Because of you, my life has meaning again. Thank you!"
"Bralsa's been nice enough to show me how to swing a pickaxe. She's an old hat when it comes to digging up ebony. I may not be an expert at it yet, but it's good to be back to work and have some coin in my pockets."

When you find a new steward for Neloth, you can offer the job to Rirns, who will refuse, saying, "I'd saw off my own leg for a septim, but you couldn't pay me enough to do that." You may also offer him Sadri's Sujamma, he'll refuse it with "No! I can't! It may be poison!"

Rirns can be seen begging, saying one of the following lines:

The other person will reply as follows:

Sometimes Bralsa will ask him for pity as well, while he will reply:

"Bralsa, I can barely feed myself..."

This Skyrim-related article is a stub. You can help by expanding it.
Retrieved from "https://en.uesp.net/w/index.php?title=Skyrim:Rirns_Llervu&oldid=2586649"
Categories:
Hidden categories: