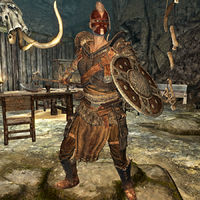 Rigel Strong-Arm is a Nord bandit, and the leader of the bandits in Pinewatch. She owns a bedroom in Pinewatch Bandit's Sanctuary.

She is equipped with a leveled one-handed weapon of any type (which has a chance of being enchanted), and a leveled shield, both of which can be up to ebony quality. She also carries a steel dagger and a considerable amount of leveled gold, ranging from 50-250 gold.

There are several notes scattered throughout her room indicating that she recently moved there and has quickly built up a criminal empire, along with a letter from her father about his concern over her choice of career, as well as her reply letter.

She appears to simply be a bandit leader with an unusually detailed back-story, and she attacks on sight.