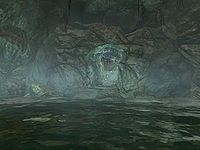 The secret entrance under the lake

After reporting to Galmar Stone-Fist in the Falkreath Stormcloak Camp, he tells you that your current objective is the Imperial-controlled Fort Neugrad where some of your brother Stormcloaks are being held captive. He has sent scouts ahead to the fort, so meet up with them for further instructions. When you meet up with the scouts speak with Ralof, who will be quite happy to see you. He will tell you that they have located a cave under the lake that should lead into the fort's prison. He will ask you to sneak in, kill any Imperials you find, and then release the Stormcloak prisoners. After you have released the prisoners, head to the courtyard where he and his men will join you in fighting the Imperials.

Follow the quest marker around the fort to the lake. Be careful not to get spotted by any Imperials or you will fail that objective and have to storm the fort. Once in the lake, swim down and you will see a small wrecked boat with a locked chest slightly hidden under it. Directly behind you is the entrance to the cave.

The passage at the bottom of the lake will lead into the prison level of the fort, through the natural cave at the southeastern corner. Eliminate the Imperial soldiers in the prison room and get a Fort Neugrad prison key from them (there should also be one lying on top of a chest in the same room).

Open the cells and the Stormcloak soldiers will run to a chest to acquire weapons and armor. Talk to one of them and he will ask you what to do: you can tell them to wait where they are, or follow you.

As you leave the Fort Prison level and reach the courtyard, you will engage more Imperial Soldiers. Ralof's band will join the fray once you start the fight. After the fight, you will have to go inside the fort to eliminate the rest of the garrison. You can have Ralof follow you, or tell him to wait out in the yard.

Once the Imperials and the fort commander are dead, talk to Ralof and he says that he will stay and clean up the mess. That ends the quest and starts the next stage in Liberation of Skyrim.