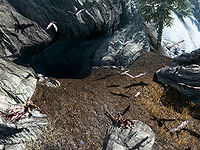 Pinepeak Cavern is a small bear cave located along the Treva River. Following the road north out of Ivarstead, cross the river as if you were going to climb the 7,000 steps to High Hrothgar, and at the start of the steps turn north. The cave is on the opposite shore from town.

A bear is guarding the entrance to this cave. Two dead hunters lie at the mouth of the cavern, and in front of the cave by a large rock is a canis root. 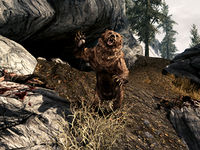 Upon entering, you are in a short tunnel opening out into the main cave; there is blood splattered on the floor. There is a rock formation in the middle and a ledge starting on your right and curving around the cave. A bear will be sleeping or roaming at the end of the ledge. There is nothing else of interest on the ledge. By the ledge below the bear are an unlocked chest, a leveled potion of healing, a smashed cart, a pickaxe, a medium coin purse, and a kettle containing a diamond. To the right are the remains of some poor unfortunate person; among the bones is an iron dagger. Finally, to the right of this are a corundum ore vein and a copy of the Smithing skill book Heavy Armor Forging. 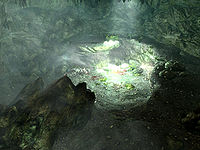