The UESPWiki – Your source for The Elder Scrolls since 1995
< Skyrim: Items / Mining / Smithing(Redirected from Skyrim:Orichalcum Ore)
Jump to: navigation, search 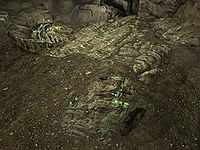 Orcish weapons and armor are made using the mineral Orichalcum with techniques developed by the Orcs. The armor is of medium-quality, but the weapons are relatively low-quality.

There are a total of 78 veins, 16 ores, and 12 ingots available in the game. Only locations containing multiple veins, ores, or ingots are included in the following list. The Orichalcum Veins category contains a more complete list of places containing single veins and all exterior ore veins are shown on (map).

Orcish Smithing is the second perk in the heavy armor branch of the Smithing skill's perk tree. Unlocking it requires a Smithing skill of 50, and the Dwarven Smithing perk must have already been unlocked. Orcish Smithing allows both Orcish armor and Orcish weapons to be crafted.

The Orcish Smithing perk also causes tempering of Orcish weapons and armor to be twice as effective. This perk applies to both unenchanted Orcish gear and enchanted gear (generic armor, generic weapons, or custom), as long as the Arcane Blacksmith perk has been unlocked. Tempering of a couple other items is also improved by Orcish Smithing, namely: Shagrol's Warhammer and The Longhammer.

Orcish armor is a variety of heavy armor that is better than Dwarven and Steel Plate, but inferior to Ebony. It appears in leveled lists starting at level 25 (enchanted varieties at level 26). All items can be tempered using 1 Orichalcum Ingot, and having the Orcish Smithing perk doubles the quality improvement.

The Fearsome Fists Creation adds the Brawler's orcish gauntlets, a new gauntlet variant. The base pair can be crafted and differ only in appearance, while a pair with a 14 point Fortify Unarmed enchantment can be bought from vendors and found in random loot. 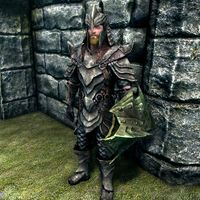 Every piece has a higher valuer, and a slightly higher armor rating than their regular counterpart, except for the helmet, which retains the armor rating of the regular version (possibly due to an oversight). It also lacks a shield variant. Its total armor rating is a bit lower than ebony armor. 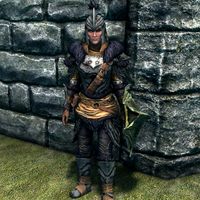 In terms of armor rating, it's only slightly worse than dragonscale armor, but it weighs considerably more, just 1 point shy of the heavy dwarven mailCC light armor. It also lacks a shield.

At a Blacksmith Forge, note that Orcish Scaled items do not appear under the Orcish category, but rather under Misc, which is possibly a bug. 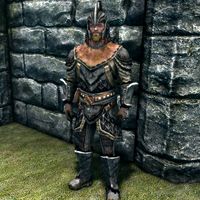 Orcish weapons are relatively low-quality weapons, better than only Iron and Steel in quality. Notably, the weapons are lower quality than Dwarven weapons, even though Dwarven Smithing is a prerequisite for Orcish Smithing. They are lighter than Dwarven weapons, though. The weapons appear in leveled lists starting at level 6 (enchanted varieties at level 7) — with the exception of the Orcish Battleaxe which has been left out of the standard leveled lists, making it harder to find in random loot. All items except ammunition can be tempered using 1 Orichalcum Ingot, and having the Orcish Smithing perk doubles the quality improvement. Arrows can only be smithed if the Dawnguard add-on has been installed. Bolts are only available with the Rare Curios creation installed. Crossbows are only available with the Expanded Crossbow Pack creation installed.

¥The Enhanced Crossbow has an additional property: Attacks with this crossbow ignore 50% of armor.
††This item can only be crafted by siding with the Dawnguard.

‡ The gold value of the Orcish Greatsword is half of what it should be (75 instead of 150). Enchanted variations use the proper base gold value of 150.