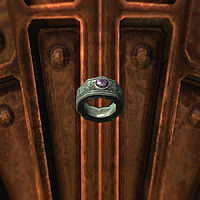 The Nightweaver's Band is a ring that can be obtained from Festus Krex as a reward for successfully hiding The Gourmet's body during the quest Recipe for Disaster. In appearance, the ring is identical to a silver amethyst ring. Its enchantment fortifies Sneak and Destruction by 10 points, making you harder to detect and decreasing the magicka cost of your Destruction spells, respectively.

Festus Krex will talk briefly about the ring when he rewards you with it, saying "It's called the Nightweaver's Band. I wore this for years. I want you to have it now. It'll give your magic and sneakiness some much needed "oomph."