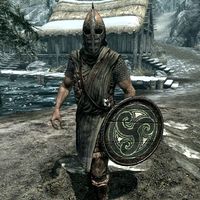 Morthal Guards are guards who act as the military and police force of Morthal. These guards serve under Jarl Idgrod. Should the Stormcloak forces gain control of Morthal, they will be replaced by Stormcloak guards under the service of Jarl Sorli.

This Skyrim-related article is a stub. You can help by expanding it.
Retrieved from "https://en.uesp.net/w/index.php?title=Skyrim:Morthal_Guard&oldid=1573197"
Categories:
Hidden categories: