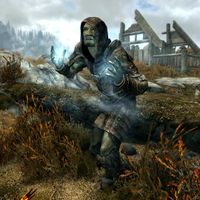 Modig Gilgar is an Orc necromancer who is encountered along the road near at the ruined house west of the Western Watchtower (map) during the quest The Staff of Hasedoki. He has just defended his cart from two bandits, as evidenced by their bodies and the arrows stuck in his cargo. He will turn hostile if you get too close.

He carries the Smuggler's Ledger, which can be pickpocketed from him or taken off his body if you choose to kill him. He wears leather armor, boots, bracers, and a mage hood. He carries a leveled dagger and knows various spells, using both in combat. He has 50% chance to carry a Staff of Fireballs, Staff of Ice Storms or Staff of Chain Lightning, and carries mage-related random loot, while his cart holds two black soul gems and a book called To Raise the Living. Reading the book explains his presence in Skyrim. It reveals that his family consists of Orc necromancers hailing from Morrowind, and that the Staff of Hasedoki was passed on through generations.