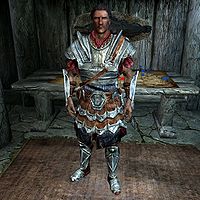 Taurinus Duilis is an Imperial soldier, and Legate of the Imperial Legion, stationed in Morthal. During the day he is found in the war room of Highmoon Hall and at night he sleeps inside the Morthal Guardhouse.

This Skyrim-related article is a stub. You can help by expanding it.
Retrieved from "https://en.uesp.net/w/index.php?title=Skyrim:Legate_Taurinus_Duilis&oldid=2181205"
Categories:
Hidden categories: