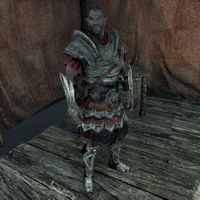 Legate Sevan Telendas is a Dunmer soldier and the field commander of Winterhold Imperial Camp. He can be found either in his tent, or planning the war effort in a tent with a map of Skyrim. Should the Legion claim Winterhold, he can be found in the Winterhold Jarl's Longhouse.

This Skyrim-related article is a stub. You can help by expanding it.
Retrieved from "https://en.uesp.net/w/index.php?title=Skyrim:Legate_Sevan_Telendas&oldid=2181275"
Categories:
Hidden categories: