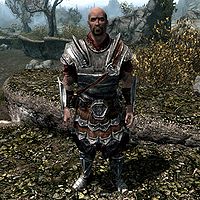 He wears Imperial armor with matching boots and bracers. He wields an Imperial sword and a steel dagger. For ranged combat, he carries an Imperial bow. He carries a number of steel arrows and his sleep outfit, a belted tunic.

This Skyrim-related article is a stub. You can help by expanding it.
Retrieved from "https://en.uesp.net/w/index.php?title=Skyrim:Legate_Emmanuel_Admand&oldid=2181266"
Categories:
Hidden categories: