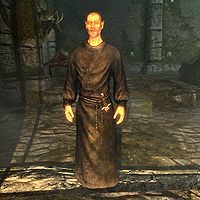 Kornalus Frey is a High Elf warlock who can be found in the ruined fort of Harmugstahl, conducting disturbing experiments on the unfortunate frostbite spiders residing there.

When you approach him, he will confront you, saying, "What? How did you get this far?", before attacking you. He wears Black Mage Robes and Black Mage Boots, and carries a dagger of up to Elven quality.

This Skyrim-related article is a stub. You can help by expanding it.
Retrieved from "https://en.uesp.net/w/index.php?title=Skyrim:Kornalus&oldid=2481863"
Categories:
Hidden categories: