Note: This quest does not appear in your journal (see this section for details).

On the hill between Fort Frostmoth and the Wreck of the Strident Squall lies the charred remains of a shack called Hrodulf's House. Not much is left of the original interior and the house is seemingly uninhabited and partly covered in ash. When you approach the premises, two ash spawn will rise from the ashes and attack. Dispose of them and look around for some minor loot in a chest, an East Empire Company strongbox holding a pendant for the quest Pain in the Necklace, and finally, a trap door leading to a secret underground basement. 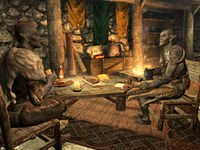 "Listen to this one!"

Downstairs, you will find a much more comfortable room, complete with a table, bookshelves, and food, but also some unwanted visitors, specifically two reavers hiding from the ash spawn you just confronted upstairs. You will land in a safe spot behind a corner, so you can overhear the conversation:

Reaver #1: "Listen to this one! 'My nights have been impossible to bear without you. I beg of you: Please depart that blasted isle and return to Solitude at once!'"
Reaver #2: "Ha ha ha! No more! What a fool."
Reaver #1: "Do you think he's the one we left in the tunnel?"
Reaver #2: "Who cares? Nords all look the same to me."
Reaver #1: "Ha! Wait... Did you hear that? Sounds like those Ash Spawn are back."
Reaver #2: "Well, at least if the other Nord returns, they'll take care of him."

After the conversation, the reavers will start walking towards you and the trapdoor, so expose yourself and battle them both. Once they are dead, investigate the table and read the letter that amused them so much.

The letter is from a Solitude citizen named Bjornolfr and is addressed to his lover, Hrodulf. In the letter Bjornolfr shows great concern about the welfare of Hrodulf, and encourages him to leave Solstheim and return to Solitude. Look around the room and locate Hrodulf's journal on the crate to the north. Read through it and learn about the growing madness of newcomer Hrodulf who moved into the house, only to be obsessed with a strange rumbling from the basement, in his own words, "a calling from the depths". As his madness escalated, Hrodulf went to town and bought various tools for digging, and apparently broke down a wall behind one of the bookshelves, obsessed with solving the mystery about the voices from beyond. Before the journal turns into the ramblings of a madman, Hrodulf shows concern about Bjornolfr and the possibility that he would travel to Solstheim and seek out Hrodulf in his house. Hrodulf, however, is nowhere to be found in the basement and you will have no choice but to investigate the bookshelves and find the one you can push aside. 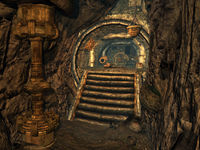 Behind the bookshelf is the tunnel created by Hrodulf in his desperate attempt to uncover the secret in his basement. The noises from below can be heard clearly, and as you delve underground, a small chamber reveals several Dwemer machines, all of them still functioning and pumping. Lying on the ground is Bjornolfr, who obviously found the journal and went down there looking for his lover, but found the two reavers instead. On his body you will find a bloodstained letter, Hrodulf's cryptic plea to Bjornolfr to stay away from the house. The chamber itself contains various dwemer artifacts, three dwarven metal ingots, two dwemer chests, one of them boss-leveled, and some gold coins scattered around. Hrodulf, however, is still missing and nothing will point you to his location.

On the coast south of Hrodulf's house, you will find a canoe and a burnt spriggan standing over the corpse of Hrodulf, and some rare scrap metal (a Broken Iron War Axe Head and Handle). He seemingly realized his madness and tried to escape Solstheim in the canoe, but his life instead ended at the hands of a wilderness creature, having caused the death of his lover through his obsession with the strange voices.