Skyrim: Hall of the Dead (Whiterun) 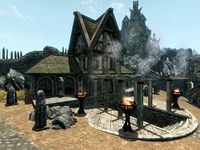 Hall of the Dead

The Hall of the Dead is the final resting place for many of Whiterun's late residents.

The building is located in the Wind District of Whiterun. It is the second building on the right from the Gildergreen tree, between the Temple of Kynareth and the House of Clan Battle-Born. There are two parts to the building, the Hall of the Dead, and the Catacombs.

The hall and catacombs are maintained by a single priest, Andurs. If a resident of Whiterun should die, their remains will be interred in the catacombs, in a coffin or urn, along with all of the items they carried in life.

Andurs' bedroom contains his owned bed, two wardrobes, a chest containing gold, and a chair by a table. On the table is a coin purse, a Weak Aversion to Fire potion, and three books. On the shelf above the table is a Weak Poison. To the left of the table is a bookshelf containing various books.

The Catacombs are where the bodies of the dead are interred. It is guarded by three respawning skeletons: to the right is the first, at the bottom of the stairs is the second, and in the closed room to the left of the main door is the third. Also in this room is a copy of the Block skill book Death Blow of Abernanit and two coin purses. Down the stairs on the left, in the first bottom alcove on the left, is an unusual gem. In the room behind the second skeleton is Andurs' Amulet of Arkay, which only appears once the quest Andurs' Arkay Amulet has begun and can be found on the small table to the right of the brazier.