Haknir's Shoal is a small camp in northeastern Solstheim, on a sandbank due northwest of Skaal Village. It is inhabited by a pirate, a pirate mage, and their pirate captain. 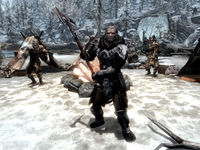 The pirates will attack as soon as they detect you. Once you have taken care of them, you may loot the pirate captain for the Deathbrand treasure map. Obtaining the map will complete the miscellaneous quest to search for the treasure of Haknir Death-Brand, and initiate the quest Deathbrand. A campfire is in the middle of the camp, with a wooden plate holding a venison chop beside the fire. There are three tents pitched around the fire. The tent nearest the small boat contains a bed roll only, and to the left of the tent is a firewood pile, a woodcutter's axe, and a medium coin purse. The middle tent contains a bed roll and a wooden plate holding a grilled chicken breast and a baked potato, while at the back of the tent is an expert-locked East Empire Company strongbox. To the west of this tent is a mead barrel on a rock with a random potion, three sacks, and a random healing potion beside it. The tent nearest land contains a bed roll, a bottle of ale, a pair of random light boots, and two food sacks. Outside this tent on the left is a knapsack. 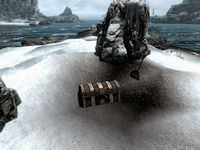 To the northwest of the campfire is an expert-locked ancient chest containing the Deathbrand Helm. There are two orichalcum ore veins in the area: the first is west-northwest of the ancient chest, and the other is farther north at the tip of the isle. Scattered around the isle are nine spiky grass plants, a nirnroot, three pearl oysters, and to the northeast a clam that can be harvested for clam meat. There is a small boat at the edge of the water just northeast of the fire, with a random light armor shield, two crates, four sacks, and a random mace inside.

On the shoreline opposite the shoal are more spiky grass plants, two more nirnroots, and a horker.