The UESPWiki – Your source for The Elder Scrolls since 1995
< Skyrim: Places: Barracks / Jails
Jump to: navigation, search 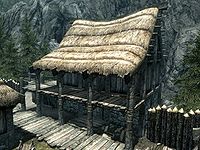 Falkreath Barracks is the living quarters for the Falkreath guards and also contains Falkreath Hold's jail. 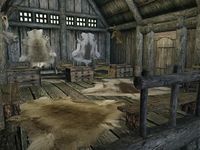 It is on the edge of Falkreath, southeast of the Jarl's Longhouse and next door to Grave Concoctions.

At the rear of the building is a practice area where the guards can pracice their melee aand archery skills, there are two practice dummies and two archery targets. There is a flight of wooden stairs leading up to the balcony and entrance to the sleeping quarters. There is also a well, three thistles and a stone quarry.HF

The entrance leads to a room used by the Falkreath guards to rest and relax in. It consists of a round wooden table and two chairs to the left and a flight of stairs up to the upper floor against the northeast wall. On the table are two bottles of wine, a loaf of bread and a goat cheese wedge. The books Guard Dossier: Aesrael and Guard's Bounty Letter Draft are also found on it.CC Opposite the entrance is a flight of stairs leading down to the basement which is used as the jail. To the left of these stairs is a set of shelves holding five bottles of alto wine, three of wine and three of Nord mead, two pieces of leather and two leather strips. There is a barrel of foodstuffs to the right with two lockpicks on top and four pheasants hanging from a rack above.

To the right of the stairs down to the jail is a square wooden table holding a copy of Killing - Before You're Killed, two potions of healing of differing strengths, three potions of stamina of differing strengths and a steel war axe. There is a steel warhammer leaning against the wall beside the table. Against the southwest wall are several bales of straw with two practice dummies in front. To the right two more food barrels with a potion of minor healing and a potion of plentiful stamina on top. There is a wooden bench against the northwest wall.

Upstairs is the dormitory with three single beds, two of which are owned, coming out from the southwest wall, they all have unlocked chests at the foot of the beds and contain minor loot, one of them also has a copy of the Two-handed skill book The Legendary Sancre Tor on top. Against the southeast wall is a wooden bench with two bottles of Nord mead on the floor beside it. The northwest wall has a door that exits onto a balcony outside in the middle of it and to the right of this is a round wooden table and two chairs. On the table are two bottles of alto wine and five loose septims. Above the stairs are two barrels with four bottles of Nord mead on top. 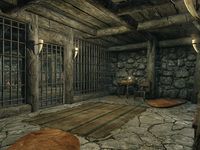 Through the door into the jail is a room used by the guards, with the main cell opposite, against the southeast wall. Inside the adept locked cell are two bedrolls, several sacks of foodstuffs and a table and chair holding two loaves of bread. Hidden behind the food sacks are several half loaves of bread and a lockpick. The guard's room has two wooden benches along the northwest wall. Against the southwest wall are several straw bales with a practice dummy in front and a pile of food sacks beside. Two food barrels are in the southern corner and to the left, along the southeast wall are the prisoner belongings chest and the evidence chest. In the middle is a long wooden table and chair with a bottle of alto wine, one of wine and a copy of Rising Threat, Vol. III. To the left of the entrance are several crates and sacks, and tucked between the crates and the wall is a copy of the Illusion skill book The Black Arts On Trial. At the northeast end of the room is a partially partitioned area with crates, barrels, sacks, a table and chair. On a barrel next to the southeast wall are copies of Rising Threat, Vol. I and II. At the end of the room is a separate cell used for Sinding. It looks like a well with water in the bottom that is knee high, but a high roof and spears blocking the entrance. Approaching the spears will cause Sinding to approach and initiate conversation, if you agree to help the quest will start and you will see him turn into a werewolf and leap out the top of the well/cell.