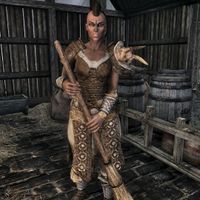 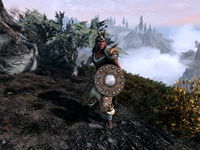 Eydvina Shield-Hearth is a Nord warrior who owns the ancient hall of Hendraheim. She sends you a warrior's challenge for ownership of the house, seeking an honorable death due to actions she took during the Civil War. She can be found sweeping at the stables of the home.

When you speak to her, no matter what option is chosen she will walk over to a nearby tree and pick up a Nordic Sword of Scorching, Scaled Horn Helmet, and Hide Shield and engage combat. She always carries an Iron Sword, lockpick, ring of major stamina, belted tunic, ale, Eydvina's Note and wears Scaled Horn Armor, Boots, and Bracers.

During combat, she uses her Nordic Sword and Hide Shield to fight. You can attack her before she picks up the equipment, leaving her to fight with less armor and a weaker iron sword. Provoking her before speaking to her (such as pickpocketing, stealing, or assaulting her) will cause her to enter combat and fail one of the quest stages. However, no matter what option is taken she will always drop the Key to Hendraheim upon death which will allow you to gain ownership of the house and complete the quest.

She will despawn as soon as you enter the house, so be sure to loot anything you think you need from her before going inside.

When you first see her, she will comment with generic dialogue.

When you speak to her:

I received your letter.
"I understand."
I've come to accept your challenge.

Are you the fool who challenged me?

This Skyrim-related article is a stub. You can help by expanding it.
Retrieved from "https://en.uesp.net/w/index.php?title=Skyrim:Eydvina_Shield-Hearth&oldid=2521693"
Categories:
Hidden categories: